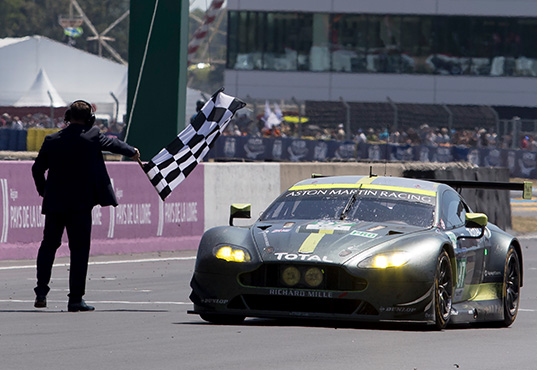 Aston Martin Racing, in its iconic Stirling Green livery, developed by HMG Paints, has taken victory at the 85th 24 Hours of Le Mans, after Jonny Adam (GB) took the GTE Pro lead on the final lap of the iconic endurance race. The Aston Martin V8 Vantage GTE and its two other drivers Darren Turner (GB) and Daniel Serra (BR), performed immensely well under the pressure to win the title.

After trading places with his rival for much of the final stint, Adam prevailed and overtook the #63 Corvette as he crossed the start/finish line on the penultimate lap. With his rival running wide at the second Mulsanne corner under pressure from the Scot, a slow puncture halted their progress and ensured the victory.

Speaking of the result, Andy Palmer, President and CEO Aston Martin said, “I am immensely proud of everyone who has played a part in this victory today. To enjoy this kind of success at the top level of endurance racing is testimony to the quality of both the team and the V8 Vantage GTE. I am sure that Darren, Jonny and Daniel’s victory today will go down as one of the all-time greatest drives at this iconic race. I wish them the very best of luck for the rest of this year’s World Endurance Championship”.

In their 4th year of partnership, technical partners HMG Paints, who produced the V8 Vantage Stirling Green livery, are ecstatic for the team “Working with Aston Martin Racing has been an absolute pleasure over the last few years and above all else it is fantastic to be involved in what is a fantastic atmosphere surrounding races, especially after winning this prestigious title” said John Falder, HMG Paints Managing Director.

Paul Howarth Team Principal Aston Martin Racing explains what the win means to the team and partners, “It’s very difficult to put into words what it means to Aston Martin Racing and all of our partners. Aston Martin and its heritage has a strong history with this very special race and to deliver a Pro class win with the #97 is a credit to everybody involved whether here at the track or
whatever part they play with this race team”.

The 2016 V8 Vantage GTE’s new design and Stirling Green livery made its debut at The Prologue, the official WEC test session at Circuit Paul Ricard in France on the 25th of March last year and will now be remembered as an icon to this year’s outstanding win at Le Mans 24 hours. HMG Paints, the UK’s largest independent coatings manufacturer, utilised its extensive lab facilities, high-spec development equipment and team of experienced colour specialists to produce the colour alongside a plethora of bespoke, high performance motorsport coatings.

Aston Martin Racing will return to the FIA World Endurance Championship for the 6 Hours of Nürburgring on Sunday 16 July.