Hosting multiple playing codes on a single sports ground makes efficient use of facilities, but problems can arise over the different pitch markings. That is especially true of American Football, with its characteristic yard lines and hash marks that give rise to the name 'gridiron', and it potentially hampered BAFL (British American Football League) efforts to get more of its top teams into stadiums, allowing more spectators to follow the sport in comfort. 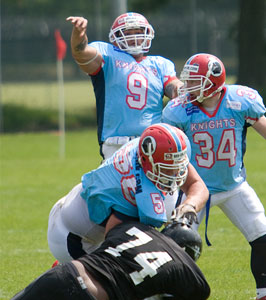 Hosting multiple playing codes on a single sports ground makes efficient use of facilities, but problems can arise over the different pitch markings. That is especially true of American Football, with its characteristic yard lines and hash marks that give rise to the name 'gridiron', and it potentially hampered BAFL (British American Football League) efforts to get more of its top teams into stadiums, allowing more spectators to follow the sport in comfort.

BAFL Division 1 team Farnham MH Knights encountered just such a hurdle, when it approached the prestigious Army Rugby Stadium in Aldershot, regarding a possible ground-sharing initiative. Sporting Facilities Director, Maj Gen Elliott, was naturally anxious about the appearance of 'greened out' lines on the Army's No 1 rugby pitch and needed convincing.

Happily, Knights Head Coach, Steve Rains, had heard about an HMG grass marking paint that might fit the bill and approached Gary Smith of HMG Coatings London. "Initially the stadium was worried about the additional lines we require for the American game," says Steve "Fortunately, I found Gary and HMG with their line marking paint, which is simply hosed off after use, and following trials at the ground, we were all convinced. It's really magic, now you see it, now you don't!"

It's not actually magic, but HMG's Hysol is a unique water-soluble grass paint that can be simply hosed off after a game, yet can withstand rain, abrasion and other match conditions with little effect. A sister product to HMG's removable marking paint, Paint Away, which has been used for semi-permanent advertising logos at various sports stadia, Hysol was developed by HMG's Manchester laboratory and Gary Smith, director of its Rainham-based associate company.

Available in standard line marking white, the new formulation is completely soluble, leaving no residual lines and causing no damage to the grass surface, although it can be equally applied to virtually any substrate. While HMG's Hysol is ideal for any code-sharing grounds, where conflicting lines can confuse players, officials and spectators, it is put to the ultimate test by American Football, with its hash marks every yard either side of the pitch, solid 5-yard markers from sideline to sideline, and painted numbers every 10 yards.

The traditional solution of painting out the gridlines using green grass paint often results in an unattractive 'patchwork quilt' effect, visible to the naked eye and highlighted by TV cameras. The sport is growing all the time in this country, yet if it is to progress beyond a largely player-participation game, BAFL teams need to move to shared stadiums, where spectators can enjoy the amenities and listen to an announcer explaining what's happening; so Hysol provides the perfect answer.

"We're delighted to have helped the Knights and the Army stadium overcome this problem," says Gary Smith. "This opens up plenty of market potential within sport and many other applications where reusable markings are required."

Never afraid to get his hands dirty, Gary himself conducted the product trials at Aldershot, painting the lines and later hosing them off, and since then has secured other early orders for Hysol. At Manchester's Hough End Playing Fields, he provided temporary markings for a TV commercial, featuring an American Football scenario; while for Leeds City Council, he supplied Hysol for marking out athletics, football, rugby league and BAFL pitches, at the celebrated John Charles Centre for Sport.

Emphasising the product's suitability for most surfaces, Gary is also targeting the forthcoming Beijing Olympic Games, where Hysol and sister product Paint Away could be used for applying lines and logos to roads, running tracks, synthetic and grass playing fields.