Ted the Sprayer favours HMG's cellulose paint for rock stars' guitars. 'One name that covers everything' is the long-standing slogan of Manchester paintmaker HMG, reflecting the fact that over almost 80 years its high performance coatings and adhesives have been applied to virtually every kind of structure, vehicle, building, boat, furniture, painted product, even museum artefact. 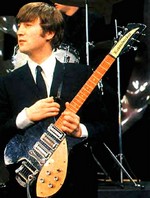 Ted the Sprayer favours HMG's cellulose paint for rock stars' guitars. 'One name that covers everything' is the long-standing slogan of Manchester paintmaker HMG, reflecting the fact that over almost 80 years its high performance coatings and adhesives have been applied to virtually every kind of structure, vehicle, building, boat, furniture, painted product, even museum artefact.

Yet would anyone associate the somewhat prosaic business of paint manufacturing with the heady world of rock and pop?

But in the British musical explosion of the 60's, 70's and 80's, HMG's cellulose lacquer graced the guitars of bands like 10CC, The Hollies, The Searchers, The Mindbenders, Roxy Music, Adam & The Ants, King Crimson, Ultravox, Human League, Moody Blues, Simply Red, yes even The Beatles. In fact, there is a distinct possibility that HMG's nitrocellulose paint was used to refinish John Lennon's iconic Rickenbacker 325, regarded as the 'holy grail' of guitars, in its distinctive and much-copied black.

The key to this rock & roll fantasy is Ted Lee, now in his sixties and living near Holmfirth, Yorkshire, who was part of the early Manchester and Merseyside music scene and known as 'Ted the Sprayer', because of his unquestionable skills with a paint spraygun and his creative capacity to transform electric guitar bodies into any colour desired.

If you wanted a custom red Strat, a black Rickie or a golden Gretsch, Ted was your man and many rock stars beat a path to his door and that of trendy music store, Barrett's of Manchester, where his specialist repair and refinishing services were also championed. And the cellulose brand he used exclusively throughout his guitar refinishing days, and later when lecturing in musical instrument technology at Leeds College of Music, was HMG Paint, or 'Marcel Guest' as it was commonly known in the early days.

"Although I was playing bass in a band called The Olympics, I started repairing and refinishing guitars in around '58, at first for mates, then it grew into a business as word spread," says Ted Lee, who is now in his sixties and planning to emigrate to Australia with his wife Brenda (yes really!). "I did some early work for Eric Stewart and Graham Gouldman when they were with The Mindbenders and later, when they formed 10CC, I even toured with the band, looking after their instruments. When I resprayed Lennon and Harrison's guitars in black, Alan Clarke from The Hollies wanted the same finish, then other well-known bands followed suit."

The refinishing of John Lennon's 1958 Rickenbacker 325 is still the subject of endless speculation, even a dedicated blog called Baby's in Black, but Ted believes he was the man who effected the original colour change and Brian Higham, who worked at Barratt's during that time and played with Manchester band Harbour Lights, supports this assertion.

Writing on the 60's music nostalgia website Manchesterbeat.com, Brian recalls: "In late 1962 Ted was asked to do a special job for the shop. It was to spray black a Rickenbacker model 325 that belonged to John Lennon and also a Gretsch Duo Jet that belonged to George Harrison. The Gretsch was already black but was in need of a re-spray. The job was done quite quickly, as I recall, as The Beatles were getting very busy, but despite the urgency, the job was done to Ted's usual high standard. This had all come about through a conversation between myself, George Harrison and John Lennon at The Playhouse in Hulme, Manchester, and in early 1963 we saw the first pics of John's Rickenbacker, in its new black livery. Another job well done by Ted the Sprayer."

Then Ted took his undoubted technical skills to Leeds College of Music, where he helped found courses related to the repair and construction of musical instruments, first as a part-time lecturer and eventually as Head of Department, until his recent retirement. Throughout, he remained loyal to HMG's cellulose lacquer, prizing its quality finish, forgiving properties and superb ageing characteristics, latterly using the company's M99 high gloss nitrocellulose, an automotive-grade product developing ultimate gloss straight from the gun.

"In the early days, I mixed my own colours, but when other lads in the same band wanted their guitars in the same shade, I was in trouble. So I started using Marcel Guest's colour matching specialist, taking along bits of old guitar, catalogues and other samples," recalls Ted "HMG served us well over the years and I remember John Falder (the current MD) when he was just a young chemist and have a lot of respect for him and his company."

Ted, who will soon be joining his daughter Samantha's family in Australia, concedes that his respraying activities inadvertently helped to make Fender's legendary Stratocaster now highly collectable, in its original Fiesta Red finish. "They called it red, but most lads in Manchester reckoned it was salmon pink, so I ended up spraying hundreds of them in different colours Which is why the original spec is now so rare," says Ted, who has accumulated much rock memorabilia of his own.

"Later I met Leo Fender himself in the States, but he seemed very happy with what I'd done with his instruments and, I must say, I always worked to the highest possible standards, helped in no small way by HMG's excellent paint."